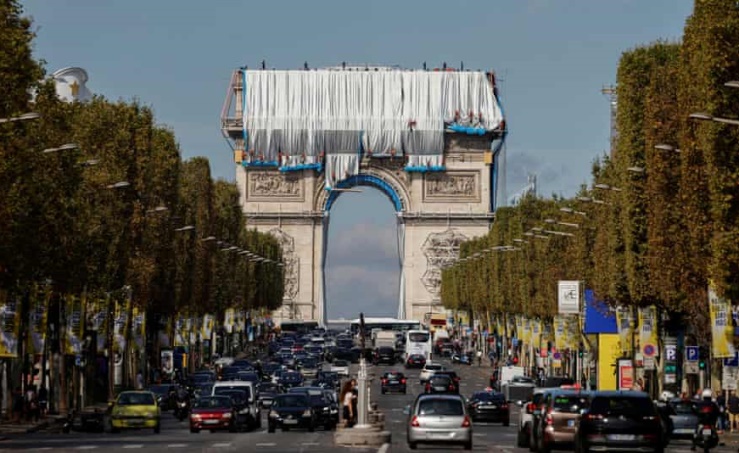 PARIS, Sept. 13 (BNA) Visitors to Paris were surprised on Sunday when they strolled the Champs-Elysées as dozens of workers began wrapping shimmering covers of artist Christo at the posthumous Arc de Triomphe memorial.

Workers have been circling the 50-meter-high, 19th-century arch to create 25,000 square meters of recyclable silver-blue plastic wrap, which will be on display between September 18 and October 3.

Imagined decades earlier in 1961 by the late Bulgarian artist Christo and his wife and fellow artist Jean-Claude, who died in 2009, L’Arc de Triomphe, Wrapped by Christo’s nephew, Vladimir Yavachev, was finally revived at a cost of around €14 million. ($16.54 million).

“The biggest challenge for me is that Christo is not here,” Yavachev said.

Christo, who has spent part of his life in Paris and New York, once rented a small room near the famous Champs Elysees after moving to Paris in 1958, when he experimented with wrapping discarded boxes and barrels with cloth and rope, according to an official website about the artist.

Christo, whose full name is Christo Javachev, was known for his larger-than-life compositions. Wrapped up a piece of coast in Australia and the Reichstag Parliament building in Berlin, a huge curtain hung in part of a valley in Colorado. He worked closely with Jean-Claude on projects.

The couple covered the Pont Neuf in Paris with a yellow cloth in 1985.

The Arc de Triomphe project, which includes Paris’ most-visited monument looming over one end of the Champs-Elysees, will allow tourists to visit the site and its panoramic terrace. The memorial is also home to the Commemoration of the Unknown Soldier, in the form of a memorial torch that is commemorated each day.