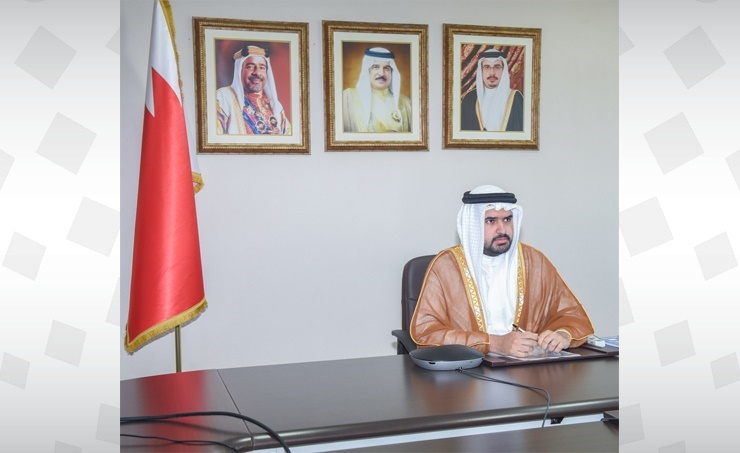 Manama, September 15 (BNA) The closing ceremony of the eleventh session of the His Highness Sheikh Isa bin Ali Award for Voluntary Work was held today, Thursday, under the patronage and presence of the Undersecretary of the Ministry of Cabinet Affairs and Honorary President of the Good Word Society. His Highness Sheikh Isa bin Ali bin Khalifa Al Khalifa.

His Highness Sheikh Isa bin Ali, in a speech on the occasion of the award ceremony, stressed that the Kingdom is under the leadership of His Majesty King Hamad bin Isa Al Khalifa, and under the directives of His Royal Highness Prince Salman bin Hamad Al Khalifa, Crown Prince and Prime Minister. It has demonstrated its international position through its outstanding success in combating the emerging corona virus pandemic, praising the Bahrain team, led by His Royal Highness, the Crown Prince and Prime Minister, for their success in putting in place effective precautionary measures to eliminate the epidemic, which made it a priority. The praise of international health organizations, and to become a role model at the international level in this field.

His Highness Sheikh Isa bin Ali recalled the contributions of the late His Royal Highness Prince Khalifa bin Salman Al Khalifa in humanitarian and volunteer work, which, he said, played a key role in ensuring the continuity of his award for volunteer work, as well as in encouraging and honoring the pioneers of charitable and volunteer work in the Kingdom.

His Highness Sheikh Isa bin Ali added that the award is allocated for the second year in a row in appreciation of their efforts and tremendous contribution to mitigating the impact of the epidemic on the Kingdom, congratulating all the winners.

The Undersecretary of Cabinet Affairs praised the role played by Her Royal Highness Princess Sabeeka bint Ibrahim Al Khalifa, wife of His Majesty the King and President of the Supreme Council for Women, in the advancement of Bahraini women in all fields, extending sincere congratulations to His Highness. Princess Sabeeka on the twentieth anniversary of the Supreme Council for Women.

His Highness Sheikh Issa bin Ali indicated that a new category was added to the award to honor female volunteers on the occasion of the anniversary of the founding of the Supreme Council for Women.

During the ceremony, the award was given to those who contributed to the implementation of the Kingdom’s strategies to combat the epidemic and mitigate its effects on the country and citizens.

His Highness Sheikh Isa Bin Ali Award for Voluntary Work was awarded to AlMabarrah AlKhalifia Foundation, in recognition of its societal role and humanitarian and charitable efforts, and its excellence in the field of volunteer work through many initiatives and programs. In various regions of the Kingdom, in addition to its efforts in the field of education and youth empowerment.

The Bahrain Women’s Development Society, Al Kawthar Society for Social Welfare and the Bahrain Society for Intellectual Disability and Autism also won the award in the “Best Voluntary Institutional Performance” category for their sustainable development programs.

It is worth noting that the “His Highness Sheikh Isa bin Ali Al Khalifa Award for Voluntary Work” is given in September of each year, in conjunction with the Arab Volunteer Day celebrations.

Organized by the Good Word Association in cooperation with the Arab Voluntary Union, it aims to encourage young people to provide innovative solutions through volunteer work to face challenges and crises.