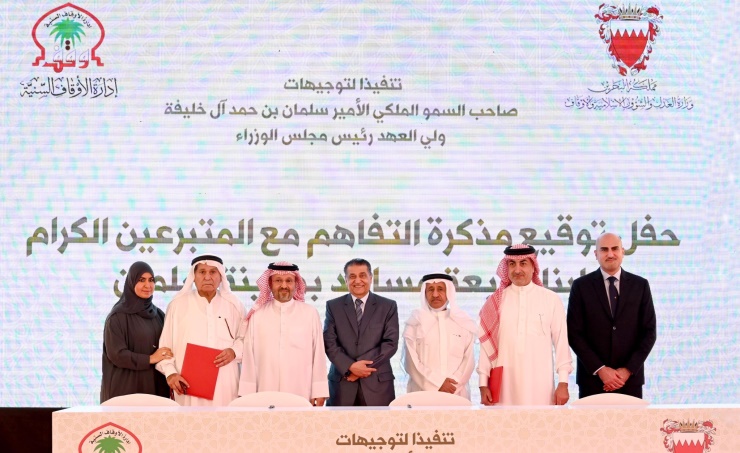 Manama, April 26 (BNA) The Sunni Endowments Department signed three memoranda of understanding with donors to build four mosques in the city of Salman.

This step comes in line with the directives of His Royal Highness Prince Salman bin Hamad Al Khalifa, Crown Prince and Prime Minister, to immediately launch a plan to develop mosques throughout the governorates of the Kingdom, and to open and restore 20 mosques belonging to the Sunnis and the Ja`faris. Endowments spread in the various governorates of the Kingdom, in addition to allocating sites and accelerating the design and construction of 12 mosques in the city of Salman.

Member of the Sunni Endowments Council and Head of the Mosques Committee Youssef Salah El-Din Ibrahim Salah delivered a statement in the name of the sponsor of the ceremony.

He pointed out that it also comes in response to the directives of His Highness the Crown Prince and the Prime Minister in this regard.

He pointed out that the projects are the first phase of implementing the order of His Highness the Crown Prince and the Prime Minister to build 12 mosques in the city of Salman. It includes the Nadia Al-Shater Mosque, the Sheikh Ahmed bin Sheikh Hassan Al-Khan Mosque, the Mosque of Muhammad Bahloul and his wife Fatima Al-Khaja, in addition to another mosque that will be established at the expense of a benefactor. At a total cost of 2,830,000 Bahraini dinars.

He extended his thanks and appreciation to His Excellency the Minister of Justice, Islamic Affairs and Endowments, Sheikh Khalid bin Ali bin Abdullah Al Khalifa, for his constant support and follow-up. He also commended the donors for their generous donations.