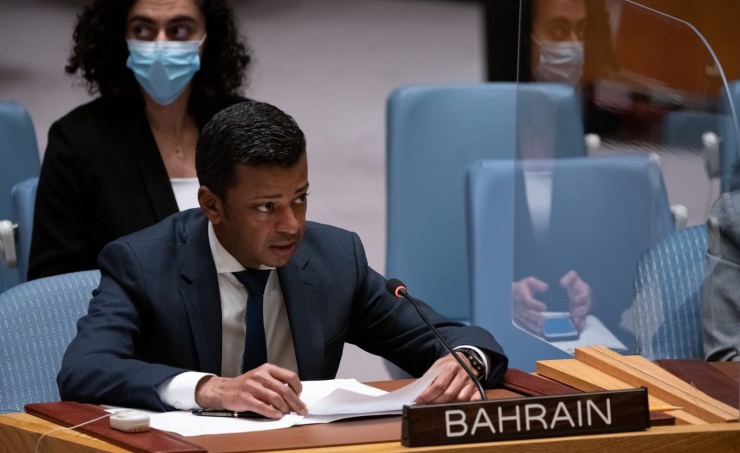 New York, April 26 (BNA): The Kingdom of Bahrain affirmed its keenness to cooperate with brotherly and friendly countries in consolidating peace and stability in the Middle East region, in addition to promoting the values ​​of dialogue, peaceful coexistence, tolerance and rapprochement. Among the peoples, established principles led by His Majesty King Hamad bin Isa Al Khalifa, and government policy led by His Royal Highness Prince Salman bin Hamad Al Khalifa, Crown Prince and Prime Minister.

This came during the statement made by the Permanent Representative of the Kingdom of Bahrain to the United Nations in New York, Ambassador Jamal Faris Al-Rowaie, during the open session of the Security Council on the situation in the Middle East, including the Palestinian issue.

The permanent delegate stressed that the existing challenges and developments in the current regional and international situations require strengthening joint efforts to lay the foundations for security, peace and stability, combating terrorism in all its forms, preventing its financing, and developing joint cooperation to achieve this. Realizing the aspirations of the countries and peoples of the region to further prosperity, security, peace and progress.

He reiterated the Kingdom of Bahrain’s firm position in support of the right of the brotherly Palestinian people in accordance with international legitimacy resolutions, and its call on the international community to assume its responsibilities in ensuring calm and opening up the serious aspects. For a just and comprehensive peace process based on the principle of the two-state solution and the Arab Peace Initiative.

He stressed the need to respect the guardianship of sanctities and endowments entrusted to His Majesty King Abdullah II, King of the Hashemite Kingdom of Jordan, in accordance with international law and the existing historical situation, and to ensure the freedom to practice religious rites. To all, and to highlight the importance of the role of the Al-Quds Committee headed by His Majesty King Mohammed VI, King of the Kingdom of Morocco.

The ambassador affirmed the Kingdom of Bahrain’s full support for the Yemeni Presidential Command Council in its management of state affairs and the accomplishment of the tasks of the transitional phase, after he welcomed the announcement of the UN Special Envoy to Yemen, Mr. Hans Grundberg, about reaching a two-month armistice, during which all military operations inside Yemen and on the Saudi borders will be halted. The Yemeni people, calling for an end to the Yemeni crisis through a comprehensive political solution between the Yemeni parties, in order to achieve the aspirations of the brotherly Yemeni people for security, stability, peace and development.