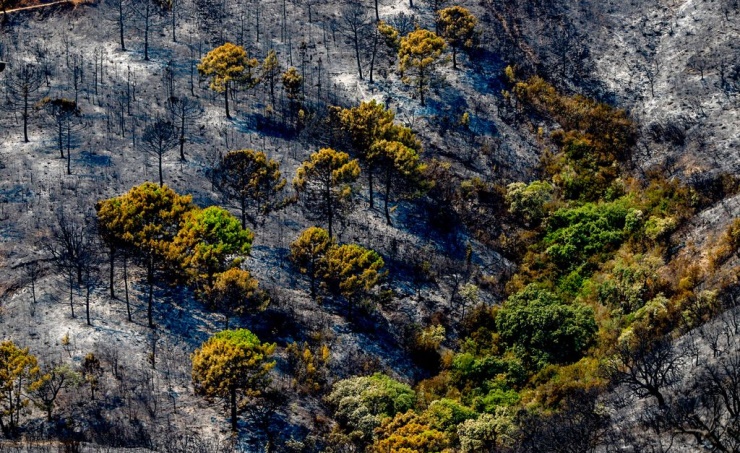 Madrid, Sep 15 (BNA): A devastating forest fire in the Costa del Sol tourist area in southern Spain has been brought under control after nearly six days.

The fires that have raged since last Wednesday have destroyed about 9,700 hectares of forest at the foot of the Sierra Bermeja near the coastal community of Estepona, Elias Bendodo, Minister of Interior for Andalusia, told reporters on Tuesday. This corresponds to an area of ​​13,000 football fields.

The politician said nearly 2,700 residents of eight vacated villages and apartment complexes are now returning to their homes. The authorities are now convinced that the forest fire was the work of the rioters.

Meanwhile, residents of the affected areas located about 80 kilometers southwest of Malaga, hundreds of members of the fire brigade, civil defense and the military emergency unit of the Union for the Mediterranean were greeted by warm applause and cheers on Tuesday by residents of the affected areas located 80 kilometers southwest of Malaga. . Deutsche News Agency (DPA) reported.

At times, the flames were put out by about 1,000 emergency personnel, supported by more than 50 helicopters and firefighting aircraft, among others.

According to the authorities, the rain that has been falling on Malaga province since Monday evening and on Tuesday was also important to the success of the firefighting.

Authorities stressed that while everything has been disclosed, some sources of the fire still have to be completely extinguished. That is why about 200 firefighters and eight aircraft remain in operation, they said.

A 44-year-old firefighter was killed during firefighting operations on Thursday, and several helpers were injured.

Andalusian Minister Bendodo said that after the first investigations, they were convinced that the fire was man-made and deliberate. But he said the perpetrators of the fire will be arrested, “there is no doubt about it.”

“These people should be put behind bars for a long time,” he said.

Earlier, regional president Juanma Moreno had confirmed: “There has not been a forest fire like this in Andalusia and perhaps in Spain for years.”

He called for stricter laws against arsonists, and said more and more wildfires were started on purpose.