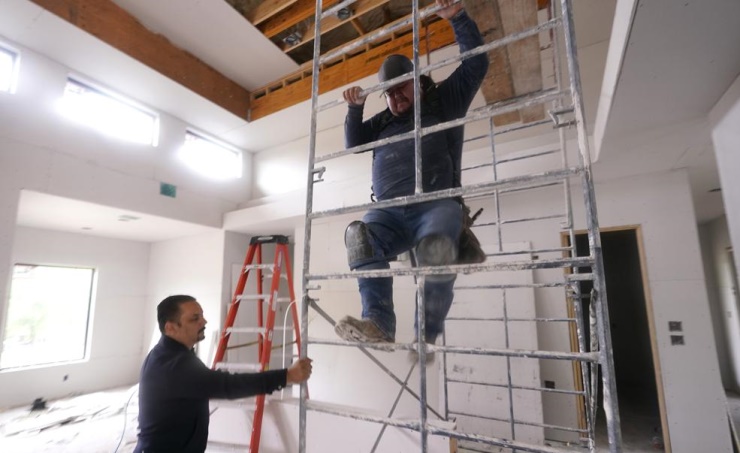 Rio Grande, May 8 (BUS): Just 10 miles from the Rio Grande, Mike Healy’s farm is so lacking in migrant workers that he has replaced 450 acres of labor-intensive leafy greens with machine-harvested crops.

In Houston, the Flores raised the price of their barbecue restaurant brisket because the cost of the cut was compounded by the inability of meatpacking plants to employ immigrant-intensive production lines, The Associated Press reports.

In the Dallas area, Joshua Correa raised the prices of homes his company built by $150,000 to cover increased costs caused in part by a lack of immigrant labor.

After immigration to the United States plummeted during the Trump administration — and then almost completely halted for 18 months during the coronavirus pandemic — the country is waking up to a labor shortage fueled in part by that slowdown.

By some estimates, there are 2 million fewer immigrants in the US than it would have been had the pace stayed the same, helping fuel a desperate rush of workers in many sectors, from meatpacking to home building, which is also contributing to a shortage supplies and price increases. .

“These two million missing immigrants are part of the reason for our labor shortage,” said Giovanni Berry, an economist at the University of California, Davis, who has calculated this shortage. “In the short term, we will adapt to this shortage in the labor market by increasing wages and prices.”

Employment issues are among the many contributors to the highest rate of inflation in 40 years in the United States — from supply chains marred by the pandemic to the soaring prices of energy and commodities after the Russian invasion of Ukraine.

Steve Camarota, a researcher at the Center for Migration Studies, which advocates reducing immigration, believes that the sharp rise in illegal immigration under President Joe Biden will make up for any shortfall in the pandemic. He also emphasized that wage increases in low-wage sectors such as agriculture are secondary contributors to inflation.

“I don’t think higher wages are bad for the poor, and I think mathematically it is not possible to bring down inflation by reducing wages at the bottom,” Camarota told The Associated Press.

Researchers say immigration is quickly returning to pre-pandemic levels, but the United States will need a significant acceleration to make up for its shortfall. Given the sharp decline in births in the United States over the past two decades, some economists predict that the total number of potential workers will begin to shrink by 2025.

The shortage of immigrant labor comes at a time when the American political system appears less willing to increase immigration.

The Democrats – who control all branches of the federal government and were recently the party best suited to immigration – have not attempted to introduce major legislation that would allow more new residents to enter the country.

A recent Gallup poll showed that concerns about illegal immigration are at their highest level in two decades. With a tough election for their party approaching in November, Democrats are increasingly divided over the Biden administration’s attempt to end pandemic-related restrictions on asylum applications.

“At some point we either decide to get older and younger or we change our immigration policy,” said Douglas Holtz-Eaken, an economist and former administration official and chair of the center-right American Labor Forum. He admitted that a change in immigration policy was unlikely: “The rules of both parties are very limited.”

That is certainly the case in Republican-controlled Texas, which has the longest and busiest stretch of the southern border. The legislature in 2017 forced cities to comply with federal immigration agents who search for people who are in the United States illegally. Governor Greg Abbott has sent the Texas National Guard to patrol the border and recently created a traffic jam by ordering more inspections at border ports.

The turn against immigration upsets some Texas business owners. “Immigration is very important to our workforce in the United States,” Correa said. “We just need it.”

He sees two to three month delays in his projects as he and his subcontractors — from drywall to plumbers to electricians — struggle to reach field crews. Correa raised the record price of his homes from $500,000 to about $650,000.

Correa, speaking from Pensacola, Florida, where he brought in a construction crew to be of service to a client who was unable to find workers to repair a beach house destroyed by Hurricane Sally in 2020.

The proportion of the US population born in another country – 13.5% at the last census – is the highest since the 19th century.

But even before Donald Trump won the 2016 presidential election and pledged to cut immigration, immigration to the United States was slowing.

The Great Recession dried up many of the jobs that attracted workers to the country, legally or illegally. Rising living standards in Latin America are prompting more people to stay put – or return from the United States.

Flores, who runs a chain of Mexican restaurants in addition to his own grill, said that while the COVID-19 pandemic has come as an even bigger shock to his industry, the slowdown in immigration has hit him hard — and not just for the meat manufacturers who supply his restaurant. “You have a lot of unfilled jobs,” he said.

He’s been raising his salary steadily, up to $15 an hour lately. “This is the culmination of years and years,” said Flores, president of the Greater Houston Restaurant Association.

Healy, who grows onions, cabbage, watermelons and turnips outside the Texas border town of McAllen, pays more for his workers, who are almost exclusively immigrants. He says US-born people will not work in the fields regardless of pay.

Before, he could only find farm workers in the area. Now join a federal program to bring agricultural workers across the border. It’s more expensive for him, but he said it’s the only way he can protect his crops from being damaged in the ground.

Healy, 60, has been cultivating the area for decades. “I live 10 miles from the Rio Grande and I never in my life thought we’d be in this situation.”