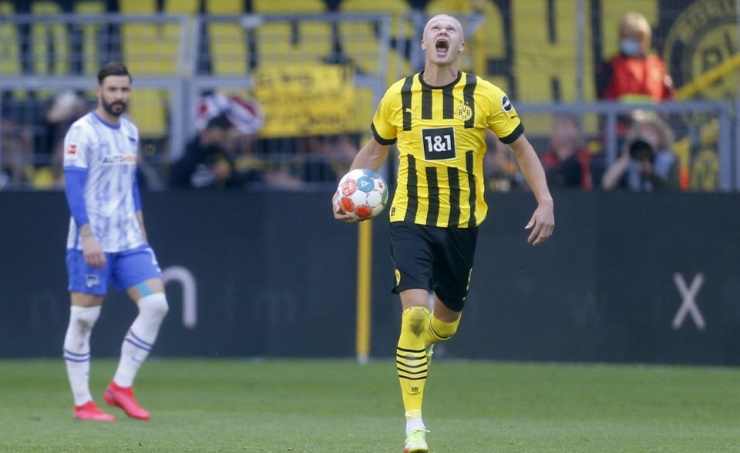 Dortmund, May 15 (BNA): Borussia Dortmund striker Erling Haaland scored in his last game for the German club when they beat Hertha Berlin 2-1 on Saturday at the end of the season, sending his rivals to a relegation playoff.

Haaland scored from the penalty spot to equalize 1-1 with his 86th goal in his 89th match in all competitions since 2020, as Dortmund finished off runners-up Bayern Munich, Reuters reported.

The Norwegian will join Manchester City next season in a multi-year deal said to be worth €300m.

Hertha took a penalty in the 18th minute after Isaac Belfodil fell in the penalty area and the Algerian stepped up to take the penalty himself.

But Dortmund eventually got his own penalty for a handball by Marvin Platnhardt, and Haaland, who also scored on his Bundesliga debut, scored on his last appearance for the club to make everything square.

Youssef Mukoko’s superb low shot in the 84th minute, which bounced off the post, snatched the three points for the hosts to bring Hertha to 16th place after Stuttgart’s superb stoppage-time victory over Cologne, which lifted them to fifteenth and safety place.

Hertha coach Felix Magath, who took charge in mid-March with the well-established team in 17th, had been looking to lead them to safety, but now must prepare his men for a play-off battle if they are to avoid relegation.