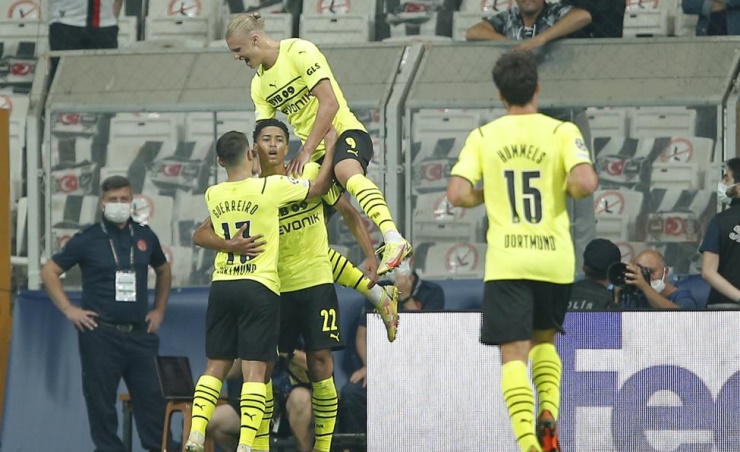 Istanbul, September 15 (BNA): Erling Haaland scored again to lead Borussia Dortmund to a 2-1 victory over Turkish champions Besiktas in the opening match of the UEFA Champions League on Wednesday.

18-year-old Judd Bellingham was outstanding as he netted the opening goal and set up Haaland for the Norwegian’s ninth goal in six games across all competitions this season, according to the Associated Press.

Haaland, who was the Champions League top scorer with 10 goals in eight matches last season, scored 21 goals from 17 matches in the tournament.

Besiktas’s start was much better, slammed by loud supporters, while visitors seemed to struggle with the soft playing surface.

It took 17 minutes before the visitors first showed a threatening signal, but the transition between Marco Reus, Julian Brandt and Haaland lacked precision and collapsed.

Bellingham scored three minutes later when he passed Thomas Meunier’s cross on his chest before firing the ball through the legs of goalkeeper Ersin Distanoglu.

For the rest of the first half it was Dortmund all, although the guests had to wait before Bellingham put Haaland in the second half just before the break. The England midfielder passed a defender by switching the ball from his right foot to his left before hacking Haaland for an easy finish.

Distanoglu stopped Bellingham’s central shot early in the second half, before Kopel improved to block Batshuayi again at the other end.

Ansgar Knauf came in instead of Haaland with five minutes of normal time remaining and attacked the crossbar in added time.
Francisco Monteiro scored the consolation goal for Besiktas in the fourth minute of stoppage time with a header from a free kick taken by Miralem Pjanic.