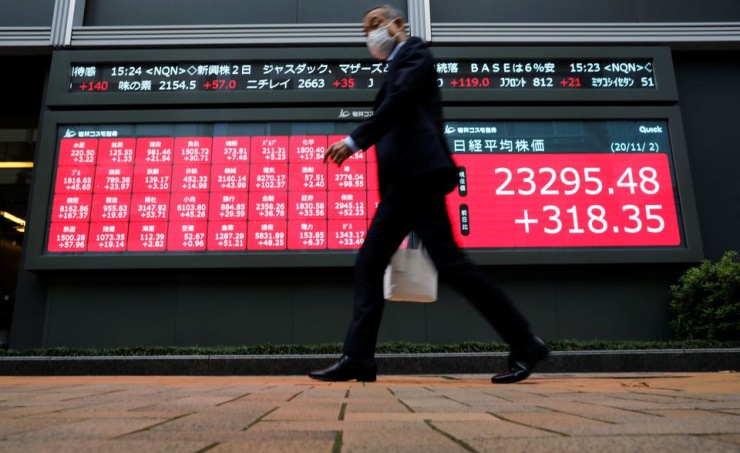 MSCI’s broadest index of Asia-Pacific shares outside Japan fell 0.82%, extending earlier losses after the release of Chinese data, while Tokyo’s Nikkei fell 0.89%, pulling away from its highest close in more than 31 years the previous day.

A series of data from China showed companies were grappling with the impact of local lockdowns in the wake of sporadic COVID-19 outbreaks, supply bottlenecks and rising raw material costs, according to Reuters.

Retail sales grew at the slowest pace since August 2020 and missed analysts’ expectations, while industrial production also rose at a weaker pace than in July, confirming recent indications of slowing economic momentum in China and adding to expectations that Beijing will provide more stimulus over the coming months. Read more

Shares of Wynn Macau at one point fell more than 30%.

Markets have also remained focused on the schedule to roll back the massive Fed-led and pandemic-led stimulus.

“There is uncertainty in the markets right now as investors are waiting to see what the Federal Reserve will do about reducing their asset purchases, which depends on the state of the labor market and the situation with inflation,” said Sean Debow, CEO of Eurizon Asset Management. .

Debo said more clarity will emerge in the coming weeks although for the time being markets have been quick to react to any data points on employment and inflation.

Overnight, the US Labor Department reported that the Consumer Price Index in August posted its lowest gain in six months, indicating that inflation has likely peaked, in line with Fed Chair Jerome Powell’s belief that higher inflation is temporary.

Lower inflation means that the Fed will be under less pressure to start curtailing its massive asset purchases, and as a result, the yield on the benchmark 10-year US10YT=RR bond fell to 1.263%, the lowest level since August 24. .

Yields rebounded slightly and little changed in Asia on Wednesday at 1.285%, while the dollar was also flat after falling against a basket of peers on inflation figures.

Overnight on Wall Street, concerns about slowing growth led to a loss for the Dow Jones Industrial Average <.DJI, while the S&P 500 fell 0.57% and the Nasdaq Composite fell 0.45%.

Barely a tenth of respondents to Bank of America’s monthly survey of fund managers expect a stronger global economy in the coming months, the lowest since the initial COVID-19 scare last April, according to the September release of the survey.

Variable delta spread has been cited as a reason for the pessimism.