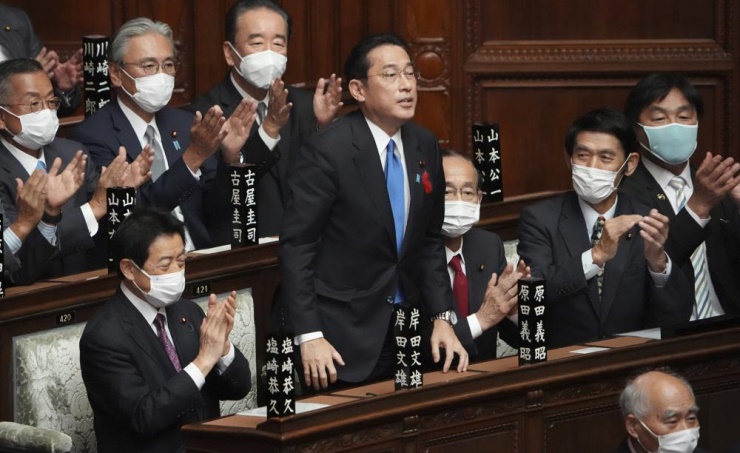 Tokyo, Oct 4 (BNA): Fumio Kishida was elected Japan’s prime minister in a parliamentary vote on Monday and will be tasked with quickly tackling the pandemic and other domestic and global challenges and leading a national election within weeks.

With his party and coalition partner gaining majorities in both houses, Kishida won by a comfortable margin over Yukio Edano, head of Japan’s largest opposition constitutional democratic party.

Kishida and his new government will be sworn in at a palace ceremony later in the day, according to the Associated Press.

He replaces Yoshihide Suga, who resigned after just one year in office as his support waned over his government’s handling of the pandemic and his insistence on holding the Tokyo Olympics as the virus spread.

The former foreign minister, Kishida, 64, was known as a moderate dove, but he turned into an apparent hawk to win over influential conservatives in the LDP. He is firmly entrenched in the conservative establishment, and his victory in last week’s vote to replace Suga as party leader was an option for continuity and stability over change.

Japanese media reported that Kishida will replace all but two of Suga’s 20 ministerial positions, and 13 will be appointed to ministerial positions for the first time. Most of the positions went to the powerful factions that voted for Kishida in the party elections. Reportedly only three women were included, after two were in Suga’s government.

Foreign Minister Toshimitsu Motegi and Defense Minister Nobuo Kishi will be retained, ensuring the continuation of Japanese diplomacy and security policies as the country seeks to work closely with Washington under the bilateral security agreement in the face of rising and rising Chinese tensions in the region, including around Taiwan.

Kishida supports strong Japan-US security ties and partnerships with other like-minded democracies in Asia, Europe, and Britain, in part to counter nuclear-armed China and North Korea.

Kishida is set to create a new cabinet position aimed at addressing the economic dimensions of Japan’s national security, and appoints 46-year-old Takayuki Kobayashi, who is relatively new to Parliament.

Japan faces increasing nuclear and missile threats from North Korea, which last month tested ballistic missiles capable of hitting targets in Japan. Kishida also faces deteriorating relations with fellow US ally South Korea over historical issues even after he struck a 2015 agreement with Seoul to resolve a row over the issue of women who were sexually abused by the Japanese military during World War II.

An urgent task at home will be to overturn his party’s slumping popularity, damaged by Suga’s fanatical handling of the pandemic and other issues. Kishida is expected to deliver a political speech later this week before dissolving the lower house of parliament ahead of the general elections expected in mid-November.

He will also have to ensure that Japan’s health care systems, vaccination campaign and other virus measures are ready for the winter resurgence of COVID-19, with social and economic activity gradually normalizing.

Kishida said last week that the economy would be his top priority. Kishida’s “new capitalism” is largely a continuation of Abe’s economic policies. It aims to increase the income of more people and create a cycle of growth and distribution.

Kishida is a third-generation politician, first elected to parliament in 1993 representing Hiroshima and an advocate of nuclear disarmament. He accompanied former President Barack Obama during his 2016 visit to the city, which was destroyed along with Nagasaki in US atomic bombings in the closing days of World War II.