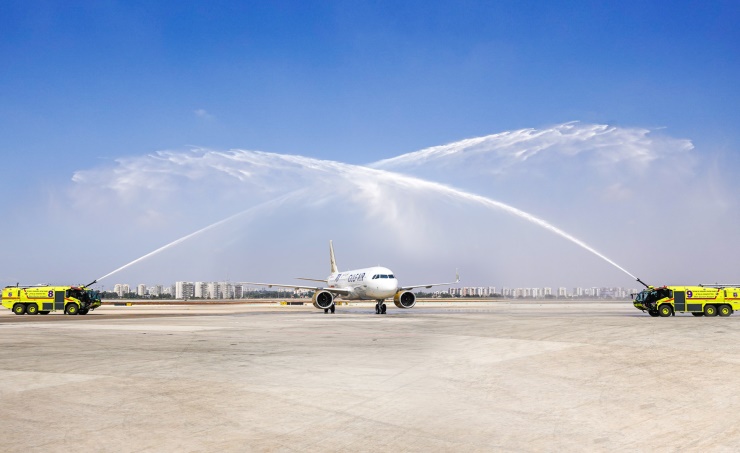 Manama, September 30 (BNA) Bahrain’s Gulf Air launched its commercial services between Bahrain and Tel Aviv, as its flight No. GF972 took off today from Bahrain International Airport at 10:40 am and arrived at Ben Gurion Airport in Tel Aviv.

The inaugural flight carried officials from the Bahrain Tourism and Exhibitions Authority, the National Communications Center, Bahrain’s Civil Aviation Affairs, members of Gulf Air’s executive management, as well as commercial passengers. This flight is the start of Gulf Air’s two weekly flights between Bahrain and Israel, and it deploys the latest fleet of Airbus aircraft.

An event was held at Ben Gurion Airport in Tel Aviv where the aircraft was greeted with a classic water cannon salute and passengers were greeted by airport authorities, media and TAL Aviation, Gulf Air’s general sales agent in Tel Aviv.

“Today we are making history by linking the Kingdom of Bahrain and the State of Israel with scheduled commercial flights,” Gulf Air Acting CEO Captain Walid Al Alawi said during the arrival ceremony at Ben Gurion Airport.

We welcome our friends in Israel to fly on Gulf Air, visit Bahrain and travel further afield to our extended network. The double weekly flights are just the beginning and we will periodically evaluate commercial performance to upgrade frequencies whenever possible and required.” He added, “I thank all the authorities here in Israel for making this inaugural flight as smooth as possible and for all the help given to celebrate this special flight.”