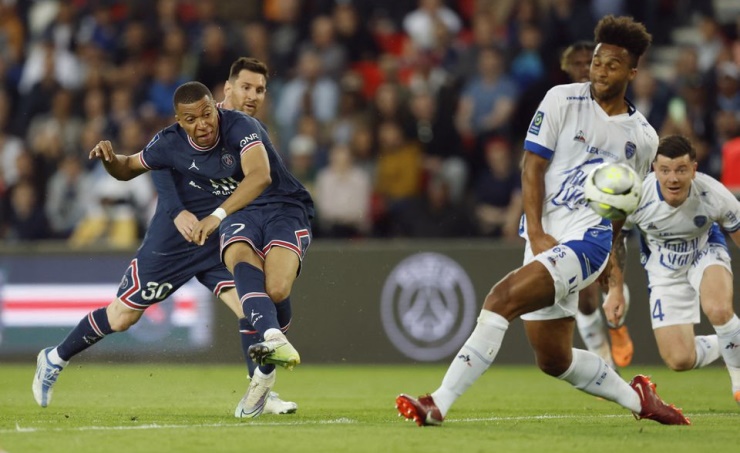 Paris, May 9 (BNA): Paris Saint-Germain lost its two-goal lead in the second consecutive game in the French Ligue 1, as it drew 2-2 with Troyes at the Parc des Princes.

Just as at Racing Strasbourg last weekend, the Paris giants looked on their way to victory, but then allowed their opponents to get back into the game and had to share the spoils, Reuters reported.

It was the third straight draw for Paris Saint-Germain, who took the Ligue 1 title two weeks ago, and a valuable point for Troy, now six points behind the relegation positions with two games remaining to play this season.

Paris Saint-Germain opened the scoring after six minutes, when Angel Di Maria’s cross was met by an extension of Marquinhos, who spread his leg to easily guide the ball past Troyes goalkeeper Jesse Molin.

Kylian Mbappe was dropped in the opponent’s penalty area to allow Neymar to double the score with a penalty kick in the 25th minute but the advantage was reduced five minutes later when Nuno Mendes’ foul pass fell into the PSG center back for London from Troy-born striker Ike Ogbo, who was not Time wasted in a powerful shot.

Troyes equalized four minutes into the second half after Renault Ripart was knocked to the ground by French international defender Presnel Kimpembe and visiting captain Florian Tardieu cleverly.

Paris Saint-Germain pressed for victory as Neymar’s effort was pardoned by the VAR after it was revealed that Mbappe had pushed a defender in preparations and Marquinhos was just inches away from the second goal as he headed in the 84th minute.

In stoppage time at the end of the match, Lionel Messi slammed into the woodwork as Trois clung to a potentially valuable point.

Olympique de Marseille climbed to second place with a 3-0 victory over Lorient earlier on Sunday. They are 12 points behind the Parisians, who now have 80.