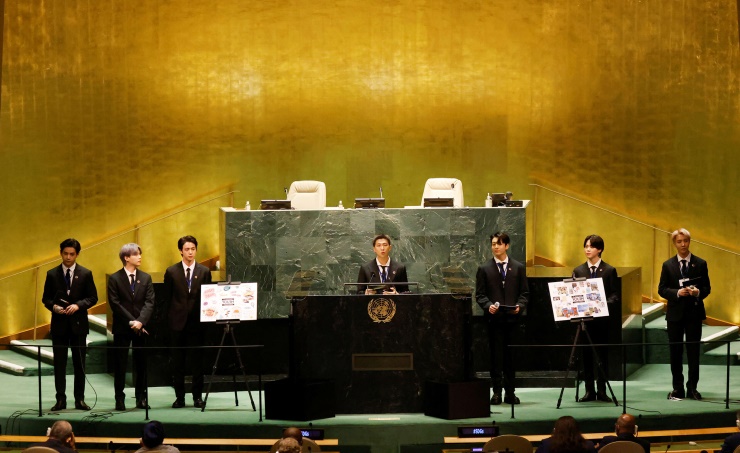 Checkpoint traveled to New York to speak in person at the 76th United Nations General Assembly event on the Sustainable Development Goals as Presidential Special Envoys for Future Generations and Culture.

After President Moon Jae-in’s speech, the K-pop party took the stage in the UN General Assembly hall and began their talk by describing the losses and missed opportunities caused by COVID-19, the Korean News Agency YONHAP.

“I have heard that today people in their teens and twenties are being referred to as the lost COVID generation, and that they have lost their way at a time when they need the most diverse opportunities and must try new things,” said group leader RM. . “But I think it would be an exaggeration to say that they are lost simply because the paths they take cannot be seen with adult eyes.”

Jimin referred to photos he said he shared with the band with guys from all over the world, depicting the children learning new things, living healthier lives and continuing their friendships online.

“They don’t look lost,” he said. “They seem to find new courage and take on new challenges.”

Jane suggested that the younger generation should be called the “welcome generation” rather than the “lost generation”.

“Because instead of being afraid of change, this generation says ‘hello’ and keeps moving forward,” he explained.

J-Hope stressed the importance of making the right choices and added that all seven members have been vaccinated against COVID-19.

“The vaccination was kind of a ticket to meet our fans waiting for us, and to be able to stand here in front of you today,” RM said. “Just like we said in our post today, we’re also doing the things we can do right now.”

The group used their speech to highlight the importance of tackling climate change.

“We just talked about the things we mourn, and I shudder when I think of the mourning on the floor,” J-Hope said.

RM revealed that while preparing for the speech, he learned that many young people are interested in environmental issues and choose it as their field of study.

“The future is an unexplored land, and this is where we will spend more of our time than anyone else,” he said.

In closing, the group played a video of the party performing “Permission to Dance,” one of their singles, both inside and outside the United Nations Headquarters.

In the clip, the members appear one by one in the same hall where they gave the speech and dance together in the open air.

With the towering Manhattan skyscrapers in the background, they then break into their perfectly synchronized dance moves before a crowd of people from different nations join them to perform the sign language used in the song.

This is the third year that the K-pop sensation has addressed the United Nations General Assembly.

In 2018, RM spoke at a UNICEF event where he urged young people to love themselves and raise their voices.