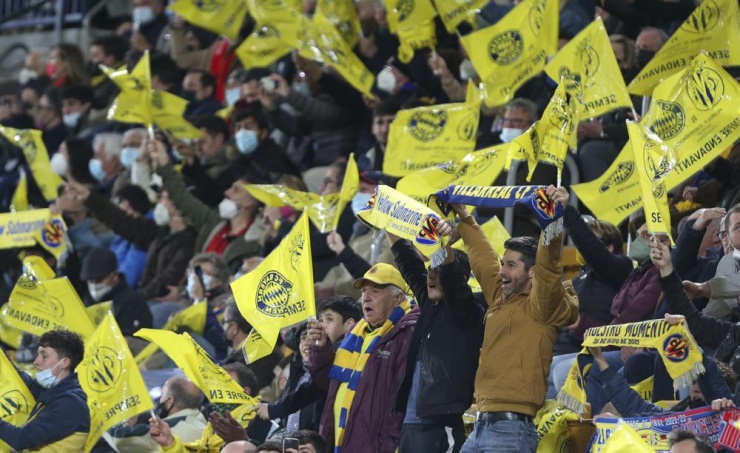 Villarreal, April 27 (BUS): Juventus and Bayern Munich learned the hard way that Villarreal, despite their modest reputation, is not easy going even in the elite competition in Europe.

Now the club from a small town of 50,000 people in eastern Spain must overtake another giant standing in the way of Ahlam’s debut in their first Champions League final, the Associated Press reports.

Liverpool host Villarreal on Wednesday at the always intimidating Anfield. Villarreal hopes to reproduce the surprises he achieved against Juventus in the round of 16 and Bayern in the quarter-finals, or at least avoid a final defeat, before hosting the return match next week.

“They are the favourites, but we have our strength that will allow us to compete,” Unai Emery, whose strength as coach is planning for the knockout competition, said on Tuesday.

“We are here because we have our credentials after passing the previous rounds against important competitors. The challenge is bigger now after Juventus and Bayern Munich, and we have to work hard to give our best both collectively and individually.”

Relatively unknown among casual football fans outside of Spain, Villarreal has for years built a reputation for being one of Spain’s best-run clubs. Regardless of the coach or team members, the team known locally as “Yellow Submarine” for its bright banana-colored uniform, constantly produces attractive teams and starts attacking first, who like to get the ball.

Owner Fernando Roig, a billionaire businessman who owns a local ceramics company and a stake in a highly successful supermarket chain, is credited with building and maintaining a stable club with great interest in bringing in talented players without breaking the budget.

Villarreal reached the only Champions League semi-final in 2009 and finished second in La Liga in 2008 under Manuel Pellegrini. But it reached its climax last season when Emery led it to win the European League title, the first major title in the club’s history, after defeating Manchester United on penalties in the final.

It was Emery’s fourth Europa League title as coach, after winning the European second tier three times with Sevilla. But eliminating back-to-back Juventus and Bayern is arguably his greatest achievement, and it comes as he rebuilds his reputation at Villarreal after a tough time at Arsenal.

“(Emery) is a coach who is obsessed with details,” his Liverpool counterpart, Jurgen Klopp, said on Tuesday. “Different ways to press and respond to different results. A world class coach doing a great job.”

Villarreal have lost only once in their entire Champions League campaign this season, losing 2-0 to United in the group stage. Otherwise, the achievement is exceeded. His 3-0 win over Juventus last month was one of the things his fans will enjoy for years.

“We are looking forward to a match against an opponent who is in good shape,” Villarreal midfielder Dani Parejo said on Tuesday. “We go there with confidence in the world, we are strong together. We made history last year by winning the (European League) and we are making history this year too, which is no accident. She trusts a project that has been around for years.”

Villarreal will arrive in the match after eight days of rest, compared to three days for Liverpool. While Liverpool are also fighting for the Premier League title, Villarreal are focusing on their historic chance in Europe while they were seventh in Spain.

READ MORE  MATCHDAY: Man U at Atletico in CL; Liverpool plays in EPL

“Maybe there was a small advantage in the last two games – maybe Juventus or Bayern underestimated them,” Klopp said of Villarreal. “But that will never happen to us.”

The backbone of Villarreal consists of Parejo, Spanish striker Gerard Moreno and the pair of central defenders Raul Albiol and Pau Torres.

But Villarreal gave a second chance to players who did not succeed in England. Midfielders Giovanni Lo Celso, Etienne Capoy and right-back Juan Foyth have finally found a place to shine at Villarreal after frustrating spells at Spurs.

Emery’s main dilemma before kick-off is Gerrard’s readiness. The Spain striker injured his right leg two weeks ago after scoring and assisting in the 2-1 win over Getafe.

If Gerrard is not available, the burden of scoring will fall to Arno Danjuma, who now leads Villarreal with 16 goals in all competitions after a season after playing in the second division for Bournemouth. Samuel Chukwueze is one of the best dribblers in La Liga, and the winger is reaching a high level after his late goal in Munich ousted the powers of the Bundesliga.

And Liverpool’s only absentee is striker Roberto Firmino, who is still suffering from a foot injury.