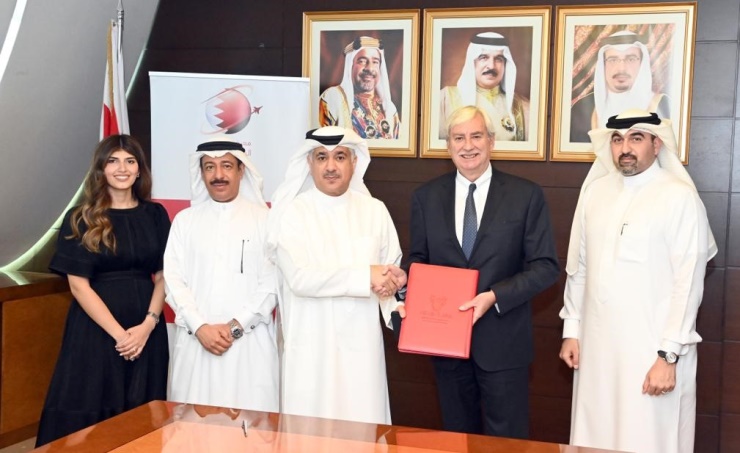 Manama, May 8 (BNA) Minister of Transport and Communications Kamal bin Ahmed Mohammed and CEO of the National Bank of Bahrain Jean-Christophe Durand signed a partnership agreement.

Under the agreement, NBB will be the silver sponsor of the Bahrain International Airshow (BIAS) from 9-11 November at Sakhir Air Base.

Organized by the Ministry of Transport and Communications and the Royal Bahraini Air Force, BIAS is celebrating its 10th anniversary this year.

The National Bank of Bahrain said that as a proud national enabler and as a prominent member of Team Bahrain, it constantly supports government events and initiatives, making the Kingdom a global hub for aviation.

“The participation of NBB in BIAS2022 as a silver sponsor contributes to a greater success of the event,” the minister said.

“We commend the National Bank of Bahrain for its support and positive contribution that will work to attract local and international companies operating in the aviation sector, as international events such as the Air Show will put the Kingdom on the global map and enhance its position in all economic, commercial and commercial fields of investment criteria.”

Durand said that NBB is proud to be the Silver Sponsor of this year’s Bahrain International Airshow, which will showcase the best equipment in line with the highest international standards.

He said, “This sponsorship comes within the framework of our commitment to support the Kingdom’s initiative, which works to enhance its regional and international standing to new heights.”

“We look forward to activating our role as a national catalyst and witness the broader success of this year’s show, the fastest growing air show in the region.”

In 2018, the National Bank of Bahrain sponsored BIAS with its commitment to strengthening Bahrain’s economy and strengthening its partnership with the local community.