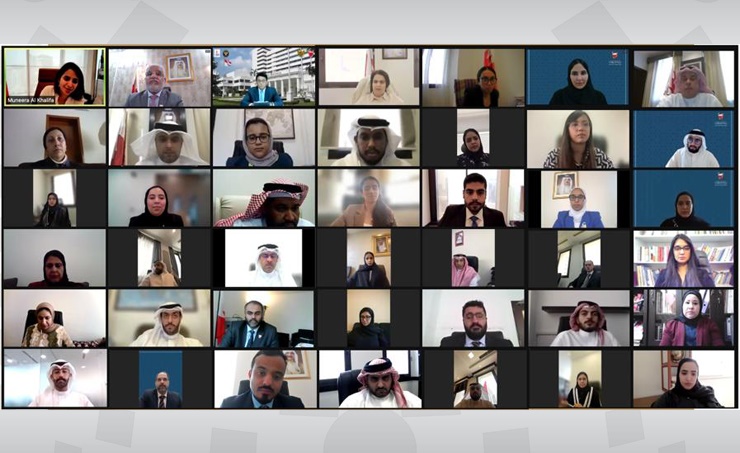 Manama, April 28 (BNA) The Mohammed bin Mubarak Al Khalifa Academy for Diplomatic Studies organized today the fourth and final session of the (Ambassadors Council) program in its second edition, with the participation of the Ambassador of the Republic of Indonesia to the United Arab Emirates. Kingdom of Bahrain Ardi Hermoan and Ambassador of the Kingdom of Bahrain in Jakarta Ahmed Abdullah Al-Hajri.

The session was moderated by the Director-General of the Academy, Dr. Sheikha Munira bint Khalifa Al Khalifa, in the presence of a number of senior officials of the Ministry and its affiliates.

At the beginning of the session, Ambassador Ardi Harmoan expressed his pride in participating in the program of the Ambassadors’ Council, stressing his country’s keenness to strengthen relations of cooperation and political, economic and tourism exchange. Experiences with the Kingdom of Bahrain in various fields, and raising them to broader levels for the benefit and development of the two countries and peoples, through mutual official and parliamentary visits, and activating the memorandum of understanding for political consultation signed between the two countries. Foreign Ministries.

In his speech, the ambassador reviewed the pivotal role of the Republic of Indonesia in its regional and international surroundings, referring to its distinguished geographical location in the Asian continent, its keenness on global economic stability through its presidency of the G20 Summit for this year, its active membership in the Organization of Islamic Cooperation and the Asian Cooperation Dialogue Forum, in addition to its role in Maintaining international peace and security, noting the distinguished position of Indonesian women, and their classification among the top ten countries that contribute to peacekeeping missions. .

The Ambassador of the Kingdom of Bahrain to the Republic of Indonesia praised the depth of the strong and distinguished relations between the two countries, which are based on solid foundations and mutual respect, and the progress and development they are witnessing to achieve common interests, and coordinate political positions in regional and international forums to enhance security and prosperity for the peoples of the region and the world.