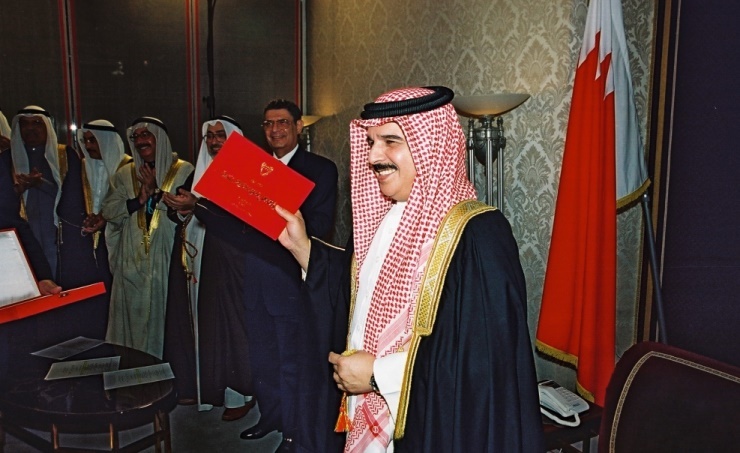 Manama, February 13 (BNA) During the turbulent times of confusion and uncertainty in the late 1990s, Hamad bin Isa Al Khalifa had an exceptional and clear sense of Bahrain’s destiny in the modern world.

His Majesty the King sought to establish a general framework for the effective governance of a more modern and advanced country that is bent on growth and change, where no one is left behind or left behind, and all people can contribute their capabilities to the process of national building.

It all officially began on October 3, 2000, when he opened the new session of the Shura Council, and he set out in his address to the nation the main features for the start of a new stage in the political future of Bahrain.

On November 23, Decree No. 36 was issued to form a national committee to draft the National Action Charter, a charter document, and a foundation for a new political, social and economic structure in Bahrain.

The committee, made up of 44 of Bahrain’s finest men and women, representing the various segments and components of the state, benefited from the knowledge, expertise and experience of its members and drafted the charter that defined the main principles, foundations and objectives. The reform process and the new political, social and economic structure.

The charter dealt with the basic premises of Bahraini society, the goals and foundations of governance, and the basic rights and freedoms of Bahraini citizens. The foundations upon which the family, society and civil society organizations are based, education, culture, science and work as a right and an obligation.

For days, these wonderful people worked together amid great debates, driven by a strong sense of patriotism and guided by a deep commitment to the nation.

The charter was a Bahraini idea drafted by Bahrainis and supported by Bahrainis. The move was for far-reaching reforms from within and was not imposed on the country. He had all the ingredients for success.

After being rubbed into its final form, the charter was presented to the people who overwhelmingly supported it, as reported by all national and international institutions, on February 14, 2001, with 98.4 percent of voters approving it.

It was a resounding victory to introduce major changes. It was immediately and warmly acclaimed by all peace-loving nations and international institutions.

The charter launched a new era of political and democratic reform under a modern constitutional monarchy, the rule of law based on justice and transparency, the separation of legislative, executive and judicial powers, and their cooperation in accordance with the constitution.

The charter and the constitution that followed it also led to guaranteeing public and personal freedoms, equality in rights and duties, freedom of political, social, educational, cultural and professional unions and unions, promotion of economic freedom, diversification of income sources, and protection of the environment and wildlife.

Parliamentary and municipal elections, which have been held every four years regularly since 2002, have been conducted with complete integrity and transparency, under judicial supervision and with large attendance.

The successful presence of Bahraini women in all democratic rights, including members of parliament and municipal councils, and winning the presidency of the House of Representatives in the fifth session, is a tribute to women’s political empowerment.

Raising the status of women as a full and reliable partner, with the support of the Supreme Council for Women led by its president, Her Royal Highness Princess Sabeeka bint Ibrahim Al Khalifa, wife of His Majesty King Hamad, has led to her successful participation in decision-making. Processing.

Under the charter, Bahrain has made a qualitative leap in respecting human rights, freedoms, equality and equal opportunities for all citizens without any discrimination based on gender, religion, origin or belief.

The charter is also proud of guaranteeing freedom of the press, media, and expression without allowing incitement to religious or sectarian hatred, violence, fanaticism, or terrorism.

The charter also allowed Bahrain, under the leadership of His Majesty King Hamad bin Isa Al Khalifa and his wise policy locally and internationally, to consolidate its leading position as a model of good governance and comprehensive and sustainable development, and to support international efforts. Society in maintaining peace, stability and security and combating extremism, fanaticism and terrorism.

The Charter, in essence, promoted freedom of belief, religious tolerance, mutual acceptance, and peaceful coexistence. Non-Muslims had political representation as well as a high-level presence.

The Kingdom has faced difficult challenges, but it has been fortunate to have leadership that has faced the times with confidence, transformed opportunities and problems into solutions and enhanced the perspective of Bahrain’s image as a country that always looks to tomorrow.

Thus, Bahrainis, young and old, continue to view the referendum charter with deep gratitude, great patriotism, and complete loyalty to their leaders. You gave them confidence and hope.

Their kingdom has made great strides forward full of expectations and ambitions. They look forward to continuing and building on the great reform process, well aware that their unity – unique and impressive – and their sense of responsibility, based on total inclusiveness, have made them stronger and more determined.

They face challenges with confidence and face intrigues and intrigues resolutely, with the support of the wise leadership of their king and motivated by success that has become the hallmark of the nation.

They remain committed to the noble goals and principles embodied in the Charter: respect for others and non-interference in their affairs, peace and security, friendly relations and international cooperation among nations and peoples.

The anniversary of the National Action Charter for them is another auspicious occasion to reaffirm their unwavering patriotism, love for their homeland and proud loyalty to their King.