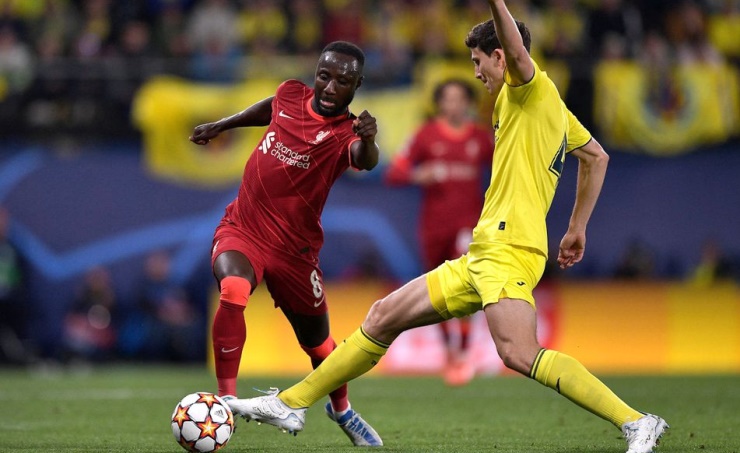 Villarreal, May 4 (BNA): Liverpool survived the panic of the first half to reach the Champions League final with a 3-2 victory over its host Villarreal, Tuesday, with a 5-2 win on aggregate, after tonight threatened to stumble on Jurgen. Club side.

Reuters reported that the visitors fell 2-0 with a modest performance in the first half, before replying with three goals in 12 minutes after the break to qualify for the European Cup final for the third time in five seasons.

The Premier League side had won 2-0 in England but looked in danger of falling into a rain-soaked ground in Spain as they tied their hosts with goals from Boulay Dea and Francis Coquelin.

But Liverpool came out in a variable manner after the end of the first half and goals from Fabinho, Luis Diaz and Sadio Mane sealed the deal, as Villarreal finished the match with ten men after a late red card to Etienne Capoy.

Klopp’s team will meet either Real Madrid or Manchester City, who will play the semi-final second leg on Wednesday, in the final in Paris on May 28. City leads 4-3 from the first leg.

Villarreal used his loyal fan base that crowded his modest stadium, and opened the scoring after three minutes with a close shot from Dia that was greeted with a shout of “Yes we can!” A home supporter.

Villarreal were lifeless in the first leg at Anfield, but looked like a completely different team as they stormed into Liverpool with the same aggressive match that toppled Juventus in the last 16 and beat Bayern Munich in the quarter-finals.

Their constant pressure forced Liverpool to make mistakes they wouldn’t normally commit, with the visitors’ passing accuracy reaching 66%, the lowest they have managed in the first half of a match in all competitions this season.

Villarreal leveled the equalizer with a close-range header from Coquelin and looked on the verge of a miraculous return.

The hosts even resumed a penalty kick by referee Danny Makele in the 38th minute when Liverpool goalkeeper Alisson Becker choked the ball and then shot it at Giovanni Lo Celso inside the area.

But Klopp took Diaz off the bench at the break and the in-form Colombian winger altered the dynamics of the match, finding space and taking advantage of a Villarreal side that seemed to run out of energy.

With Liverpool’s pressure mounting, it seemed like only a matter of time until they scored and the goal came at the end after a superb combination between Fabinho and Mohamed Salah on the right side.

The Brazilian midfielder recovered a loose ball near the Villarreal area, and passed to two defenders before playing with Al-Masry.

Salah passed him a pass between three defenders, leaving him alone to score with a low shot from the corner that passed between the legs of Villarreal goalkeeper Jeronimo Rulli, who had a difficult match.

Liverpool smelled the smell of blood and went to the jugular, led by Diaz, who shot in the middle of the penalty area to hit Trent Alexander-Arnold’s cross easily in the goalkeeper’s goal in the 67th minute.

Seven minutes later, Rowley attempted to block a long pass to Mane outside the area and missed the ball completely, leaving the Senegalese striker alone to finish off the empty net.

Capuyi, who enjoyed an impressive first half with two passes, was sent off with five minutes remaining, and picked up a second yellow card for a late challenge on Curtis Jones.

“The early goal didn’t help us, it helped them a lot, so we had to dig deep, we had to be very mature. Obviously we played great in the second half,” said Virgil van Dijk, Liverpool centre-back, adding that Klopp had given them clear instructions. In the first half.

“(We needed) to play football, play the Liverpool way, where we’ve been basically playing all season. Get the ball, you have a lot of movement on the ball but also behind the last line, they play a high streak, so with the speed that we have, we have to mix That too.”