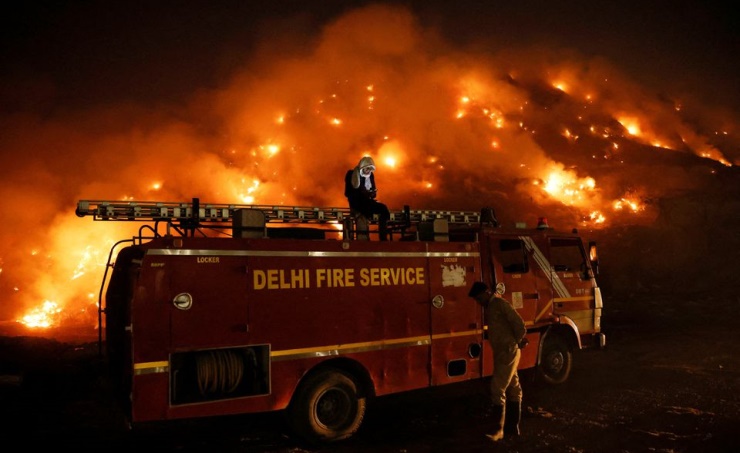 New Delhi, April 27 (BNA): Indian Prime Minister Narendra Modi warned, on Wednesday, that the temperature in India will rise too early, which increases the risk of fires, as New Delhi ignited in an extremely hot weather and a burning landfill was emitted on the outskirts of the capital. Toxic smoke in the air.

“Temperatures are rising rapidly in the country, and rising much earlier than usual,” Modi told Indian state heads of government in an online conference.

“During this period, we are seeing an increase in fire incidents in various places – in the bush, important buildings and hospitals – in the past few days.”

The fires in Delhi’s filthy waste yards also contribute to the toxic air breathed by people living in the world’s most polluted capital.

As Modi spoke, firefighters struggled to put out a fire at the Phelsowa landfill, a hill that rises above the city’s northwest edge. The smoke from burning waste forced a nearby school to close on Tuesday. Many of the students’ parents work as a garbage collector on the site.

“We can’t make them sit here, it wouldn’t do them any good,” Nayna, a part-time teacher who gave only one name, told the Reuters partner.

The cause of the landfill fire was under investigation, although such incidents are common during India’s scorching summers, when temperatures regularly exceed 40°C (104°F) before the monsoon rains.

The capital has been hotter than 40°C for several days this month, with summer peaking before the cold monsoon rains arrive in June.

The Indian Meteorological Department has forecast heat waves in the east, central and northwest of the country – which includes the capital – over the next five days, and outlined the risks to the health of infants, the elderly and people with chronic diseases.