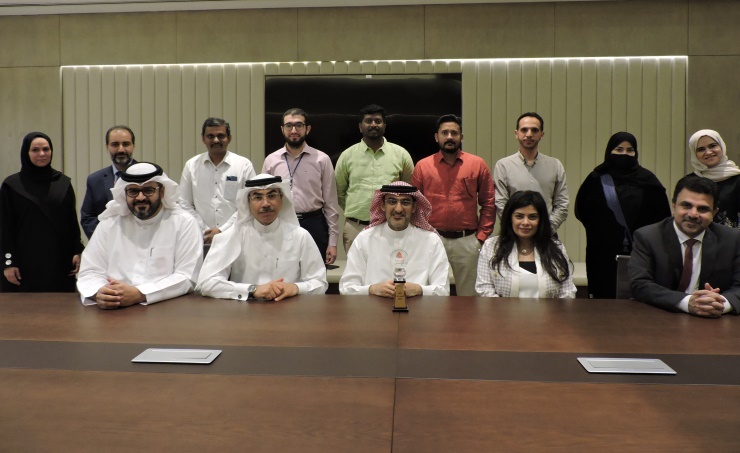 Manama, April 26 (BNA) The Chief Executive Officer of the Information and eGovernment Authority, Muhammad Ali Al-Qaed, congratulated the Tawasul team at the authority and the technical support team at Tawasul for their efforts that led to them winning the Tawasul Excellence Award 2021.

The achievement recognizes their professionalism in ensuring good handling of public comments and inquiries received through the National Complaints and Suggestions System (Tawasul).

The Leader expressed his thanks and appreciation to His Royal Highness, Crown Prince and Prime Minister Prince Salman bin Hamad Al Khalifa for this honor, praising his directives to continue developing the quality of Tawasul service.

He praised the public sector employees who contribute to raising the quality and efficiency of government services by adopting creativity and excellence in their work, with the aim of meeting the aspirations of citizens and residents.

The CEO of the Information and eGovernment Authority affirmed that the Information and eGovernment Authority is keen to continue implementing the directives of His Royal Highness, the Crown Prince and Prime Minister, and is working on a set of initiatives in this regard. It will also work to enhance the award criteria to enhance the level of competition between government agencies in the future, including the quality of their responses and the time it takes to respond.

The Leader highlighted the interest and directives of the Minister of Interior Staff Lt. Gen. Sheikh Rashid bin Abdullah Al Khalifa in the work of the Information and eGovernment Authority, which is a major influencing factor in the success of Tawasul. The Leader expressed his hope that all stakeholders will continue to do their best for the Tawasul initiative to achieve better results.

He praised the work of the development, technical and support teams in the Information and eGovernment Authority, adding that their efforts helped government authorities communicate with the public more effectively by ensuring the smooth functioning of the communication program, and studying proposals submitted by the public, including suggestions to improve communications. platform and maintain the highest standards of privacy.

The commander said that the team responsible for receiving applications through Tawasul also showed great commitment to their work, responding and following up on more than 25,000 cases in 2021 under the Service Level Agreement (SLA). Their enthusiasm and flexibility in dealing with issues raised by the public is in line with the mission of the Information and eGovernment Authority to ensure that citizens and residents remain partners in developing its electronic services, applications and other channels.

He concluded his speech by emphasizing the role of the Tawasul system in promoting the open door policy of the government and public participation in the development and decision-making process. This helped achieve justice and equality in dealing with a range of issues, which helped build trust between the public and the authorities. It also has a unified government policy when it comes to handling complaints, in line with government development plans. Tawasul also offers a feature that allows cases to be reopened within 14 days of the concerned entity’s response in cases where the beneficiary is not satisfied with the entity’s response.