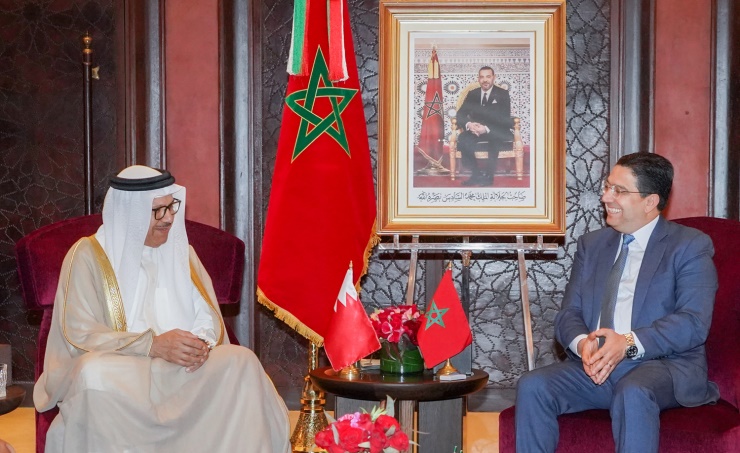 The meeting was held on the sidelines of the ministerial meeting of the International Coalition to Defeat ISIS, hosted by Morocco.

During the meeting, the Minister of Foreign Affairs praised the historical brotherly relations between Bahrain and Morocco in all fields in implementation of the directives of His Majesty King Hamad bin Isa Al Khalifa and His Majesty King Mohammed VI of Morocco.

Dr. Al-Zayani stressed the keenness of the Kingdom of Bahrain and its relentless endeavor to develop and strengthen relations of cooperation and joint coordination between the two countries at all levels to achieve the common interests of the two brotherly countries and peoples.

The meeting also discussed the close fraternal relations between the two countries and ways to enhance bilateral cooperation in various fields, intensify joint coordination and unify stances towards various issues in regional and international forums.

The two sides discussed political and security developments at the Arab, regional and international levels and their implications for the security and stability of Arab countries and the region, in addition to issues of common interest.

Following the meeting, a joint statement was issued in which the two ministers affirmed their pride in the relations of cooperation and solidarity between the two brotherly countries, thanks to His Majesty King Hamad bin Isa Al Khalifa and His Majesty King Mohammed VI, and their King. Seeking to continue developing these relationships and elevating them to higher levels.

The Moroccan minister reiterated the firm position of the Kingdom of Morocco, under the leadership of His Majesty King Mohammed VI, in supporting the Kingdom of Bahrain and standing by it in the face of any interference in its internal affairs and any attempt to undermine its security. stability and national unity.

The Bahraini minister reiterated the Kingdom of Bahrain’s supportive stance for the Moroccan Sahara, which culminated in the opening of a general consulate of the Kingdom of Bahrain in the city of Laayoune in the Moroccan Sahara on December 14, 2020, noting that this position is within the framework of the United Nations and other international and regional organizations and forums.

The two ministers stressed the need to activate the memorandum of understanding signed on February 27, 2018 between the Moroccan Academy of Diplomatic Studies and the Mohammed bin Mubarak Al Khalifa Academy for Diplomatic Studies by implementing its requirements, especially with regard to the exchange of visits and participation in training courses and workshops organized by the two academies.

The two ministers also reviewed the political and security situation in the Arab region, and stressed the importance of joint Arab action in strengthening the capabilities of Arab countries, maintaining their security and stability, and achieving sustainable development for their countries.

The two ministers stressed the centrality of the Palestinian cause to the Arab nation and its priority in the foreign policy of the two countries, following the directives of His Majesty King Mohammed VI and His Majesty King Hamad bin Isa Al Khalifa, and their strong commitment. The legitimate right of the Palestinian people to establish their independent state on the borders of June 4, 1967, with East Jerusalem as its capital, in accordance with the internationally agreed two-state solution and relevant international resolutions. In this context, His Excellency Dr. Al-Zayani praised the prominent role played by His Majesty King Mohammed VI, Chairman of the Al-Quds Committee.

The two ministers also valued the ongoing periodic consultations between Morocco and Bahrain, and affirmed their keenness to intensify joint coordination between the two countries within the framework of existing mechanisms or international forums.