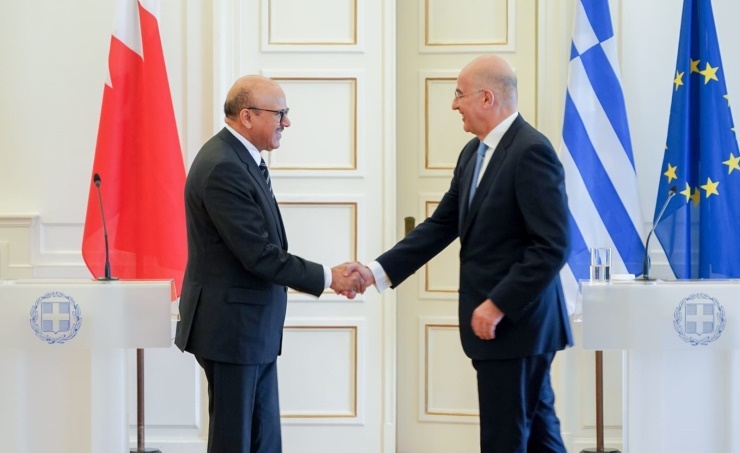 They reviewed the strong historical friendship between the Kingdom of Bahrain and the Greek Republic, and the growth and development they are witnessing at all levels, within the framework of mutual respect and a common desire to enhance and develop bilateral cooperation in various political and economic fields. And areas of investment for the benefit of the two friendly countries and peoples.

The two sides also discussed regional, international, political and security developments and their repercussions on security, peace and stability in the Middle East and Europe.

After the discussion session, the two ministers held a press conference in which they reviewed what was discussed in the session.

The Minister of Foreign Affairs praised the depth of the close historical friendship and constructive cooperation between the two friendly countries, and the growth and development they are witnessing in various fields and at all levels, in light of the mutual care between the leaderships of the two friendly countries. Strengthening cooperation and opening new horizons to consolidate and develop bilateral relations and achieve common interests.

He added that he held an important and fruitful session of talks with his Greek counterpart, during which they reviewed the distinguished friendly relations between the two countries, and stressed the need to continue joint efforts to enhance bilateral cooperation in various fields, increase joint consultation and coordination, and exploit opportunities and possibilities available to increase joint cooperation to achieve the goals and aspirations of the two friendly countries. .

He stressed that the two sides stressed the importance of developing bilateral relations in all economic, commercial, investment, cultural, tourism, technological and environmental fields, and the need to take advantage of the investment-attractive climate in both countries. To expand the areas of trade exchange, and strengthen partnerships.

He added that they discussed enhancing cooperation in the field of diplomatic training through the Mohammed bin Mubarak Al Khalifa Academy for Diplomatic Studies and the Greek Diplomatic Academy.

The Minister of Foreign Affairs confirmed that the two sides discussed the latest regional and international developments, including issues related to conflicts in the Middle East, the eastern Mediterranean and the European continent, and stressed the need to end all differences and conflicts through dialogue and diplomatic means for peace, security and stability for the benefit of all peoples within the framework of principles The Charter of the United Nations and noble human values.

He added that the two sides discussed the developments of the war in Ukraine and its repercussions on the stability and security of the European continent and international peace and security, stressing the need to reach a comprehensive and lasting peaceful settlement of the conflict through negotiations and diplomacy. And in accordance with the principles of the Charter of the United Nations, to maintain peace and security on the European continent and the world. He added that the two sides stressed the need to open safe corridors for civilians, provide them with protection, and deliver humanitarian and relief aid to refugees and displaced persons.

He added that they stressed the importance of international cooperation to confront all challenges that threaten international peace and security, including weapons of mass destruction, terrorism, extremist ideology and cybercrime.

The Greek Foreign Minister welcomed the visit of the Foreign Minister, praising the advanced level of bilateral relations and official visits between the two friendly countries. He praised the Kingdom of Bahrain and its pioneering role in building and extending bridges of cooperation between Europe and the Middle East, specifically in the Gulf Cooperation Council countries.

He stressed the similarity of Bahraini-Greek visions towards common principles and values ​​such as respect for international law and condemnation of the use of all forms of violence and force in international relations, noting the agreement on mutual support for nominations to the United Nations Human Rights Organization. The Council is the culmination of distinguished friendship relations.

Nikos Dendias also expressed the aspiration of Kyriakos Mitsotakis, Prime Minister of the Republic of Greece, to visit the Kingdom of Bahrain to build on the level of existing cooperation between the two friendly countries and to sign a number of agreements in the economic and commercial fields. Renewable energy, tourism, digital governance, and the financial sector.