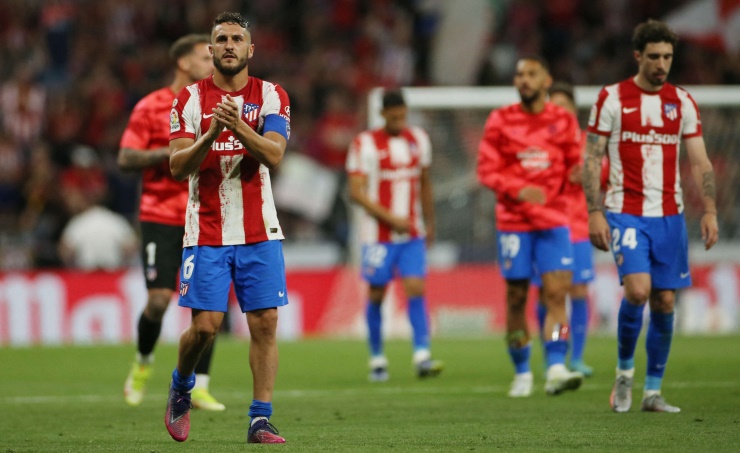 Madrid, May 9 (BNA): A penalty kick by Yannick Carrasco in the first half gave Atletico Madrid a 1-0 victory in a fiery derby match against Real Madrid, while the hosts tightened their grip on a place in the Champions League next season.

Diego Simeone’s team retained fourth place in the standings with 64 points, six points behind Real Betis in fifth place, and with three matches remaining, his team approached fourth place, to qualify for the major European Championship.

“Everyone will compete to reach the goal, but it is a strong and decisive step,” Simeone told Movistar.

“We know what this game looks like, it’s a game of strength and whoever doesn’t have it has to lose.”

Atletico, who welcomed the newly minted LaLiga champions at the Wanda Metropolitano without their traditional honor guard, pressed high as Angel Correa and Carrasco had two big chances to open the scoring in the first 10 minutes.

Carrasco put the hosts ahead in the 40th minute after the referee changed his initial decision and a penalty was awarded to Atletico after reviewing the video assistant referee for a foul on Matthews Cunha.

The midfielder slammed the ball past goalkeeper Andriy Lunin as the 23-year-old Ukrainian made his La Liga debut with Real Madrid nearly four years after signing for the club.

The goal ignited the life of Carlo Ancelotti’s side, despite resting several players after Real clinched the 35th league title last weekend, and some powerful shots threatened Jan Oblak’s goal before the break.

The Slovenian international saved another great save to deny Casemiro in the 59th minute and Federico Valverde after 10 minutes.

Minutes before the end of the match, Oblak parried Marco Asensio’s attempt to equalize with a low shot from a free kick from outside the penalty area, as the hosts claimed their first Madrid derby win since 2015.

“It was a good, competitive and balanced match,” Ancelotti said.

“We couldn’t have asked for more from this match, which comes after a very exciting week. I wasn’t really expecting more.”

Competitions usually pay tribute to the newly crowned champions on the field with both sides lining up before kick-off, but coach Diego Simeone said Atletico chose not to give Real’s players a guard of honor on Sunday out of respect for their fans.

Atletico will next travel to Elche on Wednesday, after which they have a tough match with third-placed Sevilla and sixth-placed Real Sociedad.

Real, who have lost only four league matches this season, host relegation-threatened Levante on Thursday.