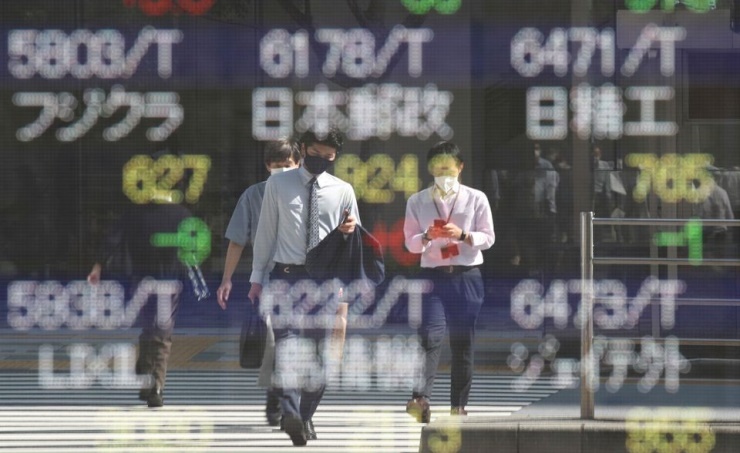 Oil prices extended their upward trajectory, with gains across the energy complex adding to inflation concerns.

“The global chip shortage will extend into next year, adding uncertainty to uneven recoveries,” they said. “Add to the energy shortage, and the economic landscape is more materially sober than the optimism that accompanied the early stages of the global recovery.”

However, a 1% rise in China’s stock index helped stabilize the mood, and the broadest MSCI Asia-Pacific stock index outside Japan rose 0.7%.

The yen’s decline provided a welcome boost to Japan’s Nikkei index which reversed early losses to rise by 1.7%, although Australia was still down 0.4%.

Earnings season begins in the US this week and is likely to bring tales of supply disruptions and rising costs. JPMorgan reports on Wednesday, followed by Bank of America, Morgan Stanley and Citigroup on Thursday, and Goldman on Friday.

The focus will also be on US inflation and retail sales data, and the minutes of the latest Federal Reserve meeting which should confirm the tapering discussion in November.

While Friday’s key US job numbers were disappointing, this was in part due to reopening problems in state and local education while private sector employment was more flat.

In fact, with a labor shortage driving the unemployment rate down to 4.8%, investors were more concerned about the risks of wage inflation and pushing Treasury yields soaring.

10-year bond yields were trading at 1.62%, after jumping 15 basis points last week in the biggest rise since March.

Bonds were also sold in Asia and Europe, with short-term yields in Britain at their highest since February 2020.

Analysts at Bank of America warned that the global inflationary pulse will be exacerbated by energy costs with oil likely to exceed $100 a barrel amid tight supply and the reopening of strong demand.

The winners in such a scenario would be real assets, real estate, commodities, volatility, cash, and emerging markets, while bonds, credit and stocks would be negatively affected.

Bank of America recommended commodities as a hedge and said resources accounted for 20-25% of major stock indices in the UK, Australia and Canada; 20% in emerging markets; 10% in the Eurozone, and only 5% in the United States, China and Japan.

The dollar was supported as US yields outpaced those in Germany and Japan, taking them to the highest level since late 2018 on the yen at 112.41.

A strong dollar and higher yields weighed on gold, which does not offer a consistent return, and left it marginal at $1,760 an ounce.

Oil prices are on the rise again after rising 4% last week to their highest level in nearly seven years.